Imperial Armies of the Thirty Years War (1): Infantry and artillery

Vladimir Brnardic Oct 19, 2021 Vladimir Brnardic
This history of the Catholic armies of the Hapsburg Empire that fought in the Thirty Years War explores the role of infantry and artillery during the last major religious war in mainland Europe. As the states of the Holy Roman Empire fractured along religious lines, all of Europe was plunged into a bloody conflict that lasted three decades, decimated populations, and annihilated communities. However, amidst this social, political, and religious catastrophe, important changes were experienced within the organization of armed forces. The war saw the end of the large mercenary forces and the beginnings of the well-disciplined national army. This book charts this progression, illustrating and explaining the forces of the key Catholic armies, while exploring the weapons, organization, tactics, and colourful uniforms used by the infantry and artillery. 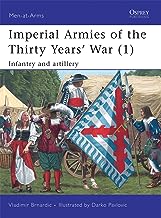